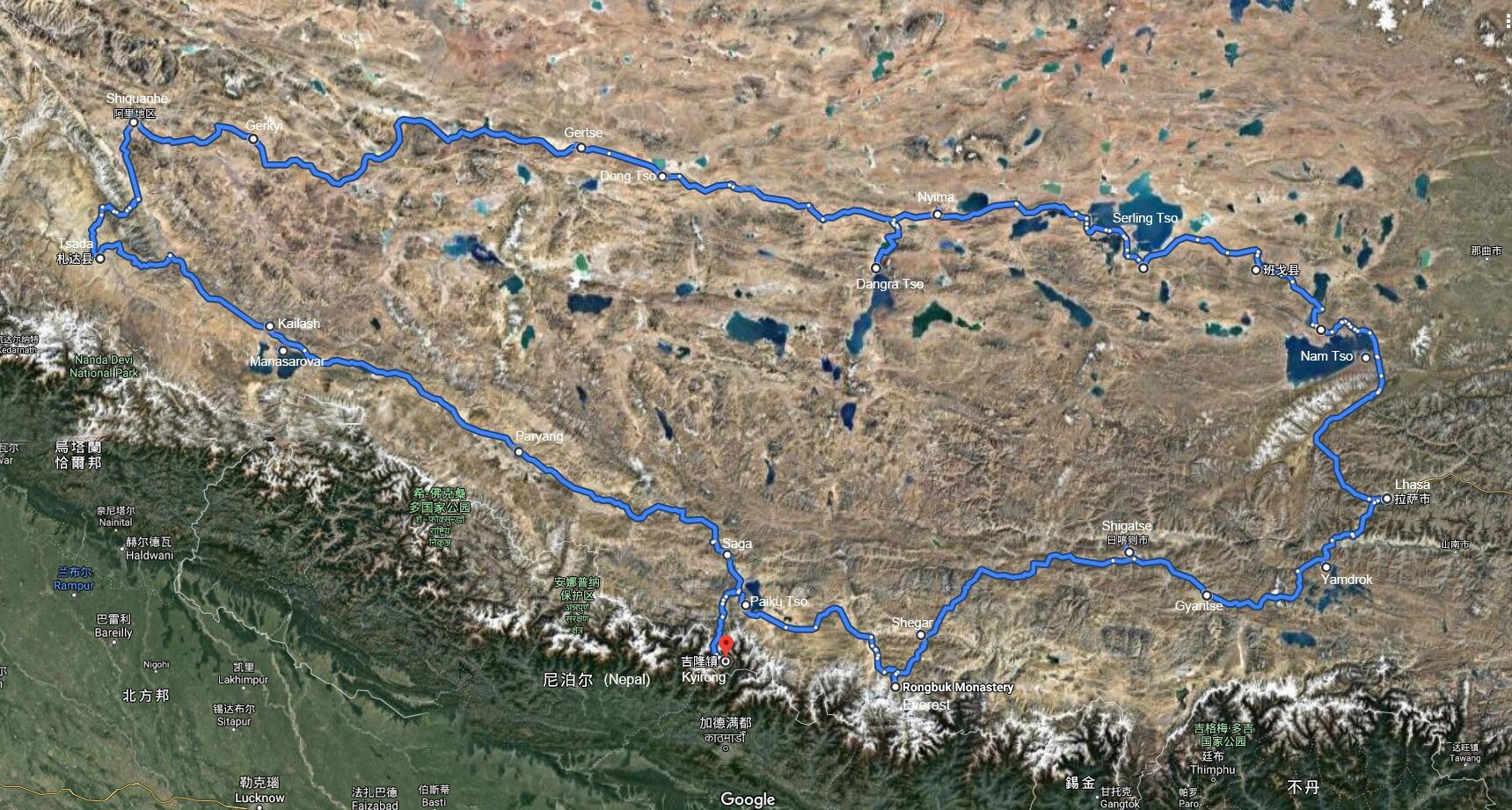 Arrive at Kyirong border. After custom formalities we enter Tibet and meet with our Tibetan guide and transfer to hotel. 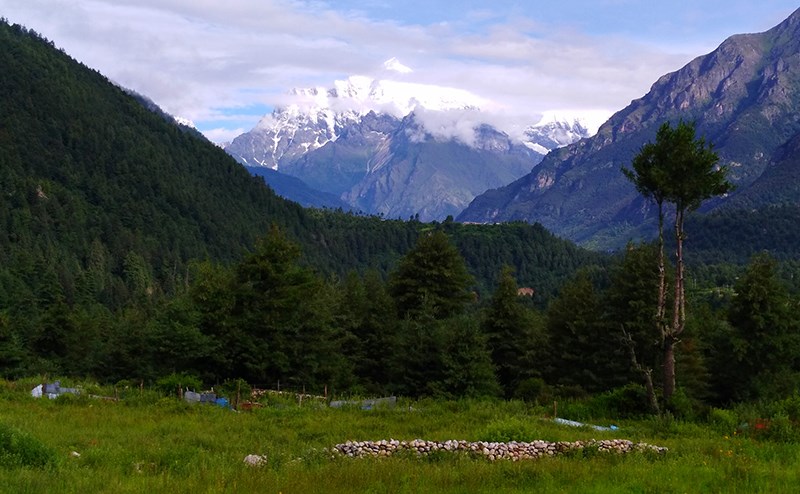 Drive to Shegar. On the way, pass by Paiku Tso Lake where we take a walk by the holy lake. With an area of more than 300 square kilometers, embraced in the arms of three mountains, the lake is rich in fish resources. Varieties of rare animals like wild horses, wild donkeys and yellow ducks inhabit in this area. Far view of Shishapangma (8012 m). In the late afternoon reach Shegar. 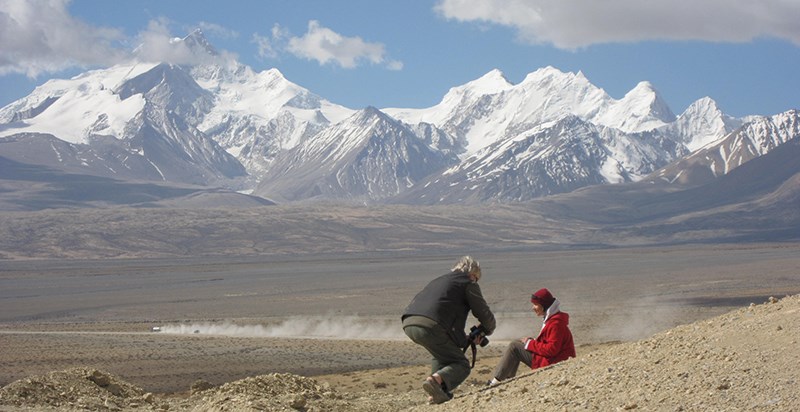 Rongbuk Monastery and Everest Base Camp

In the morning drive to Rongbuk monastery (5,154 m) and the Everest Base Camp. On the way at Pang La (5150 m), the view is magnificent: from left to right Makalu, Lhotse, Everest, Nuptse and Cho Oyu. From the Rongbuk monastery you can enjoy the impressive Qomolangma with its steep north side. Rongbuk is the largest monastery in this region and was built at the beginning of the 20th century. In the afternoon drive back to Shegar. 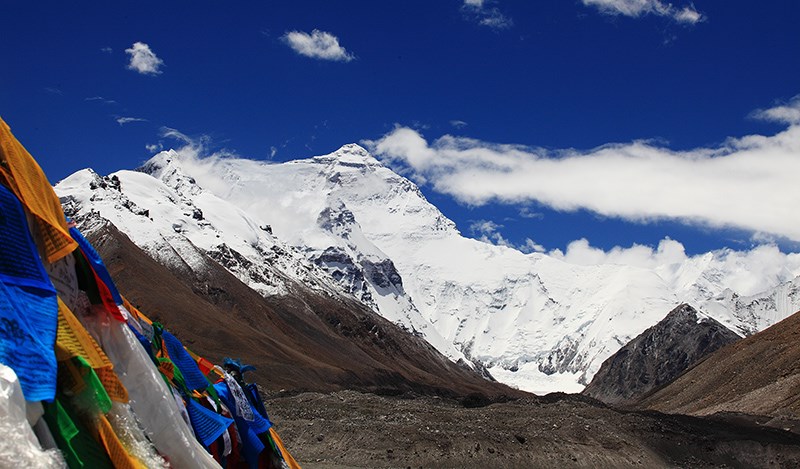 Drive to Shigatse (3,880 m), the second largest city with 40,000 inhabitants in Tibet and the traditional capital of the Tsang. In the afternoon visit Tashilunpo monastery of Gelug Sect, the seat of the Panchen Lama built in 1447 and one of the six grand monasteries in Tibet. The monastery houses a giant statue of the Maitreya Buddha, the biggest gilded statue of Maitreya (Buddha of the future) in China, and a tomb of the 4th Panchen Lama containing masses of jewels and gold. In Tibet Buddhism, Panchen Lama is just the reincarnation of Maitreya Buddha. 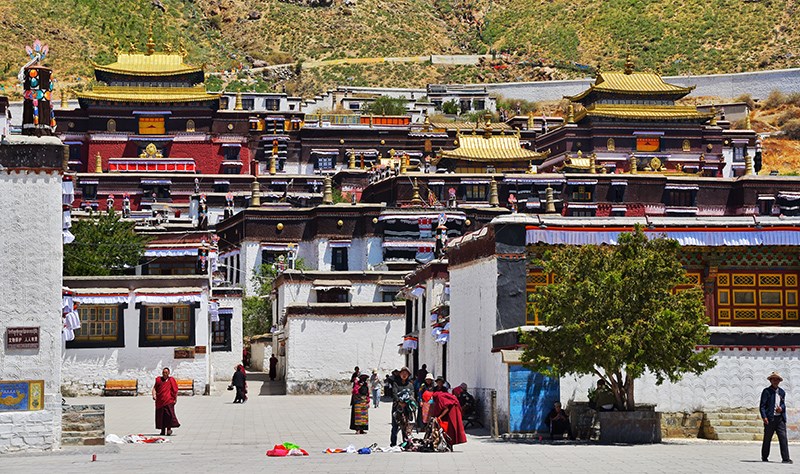 Formalities for self drive in China

In Shigatse, handle your temporary number plate and temporary driver's license. If there is enough time, have a travel in Shigatse city and the free market. 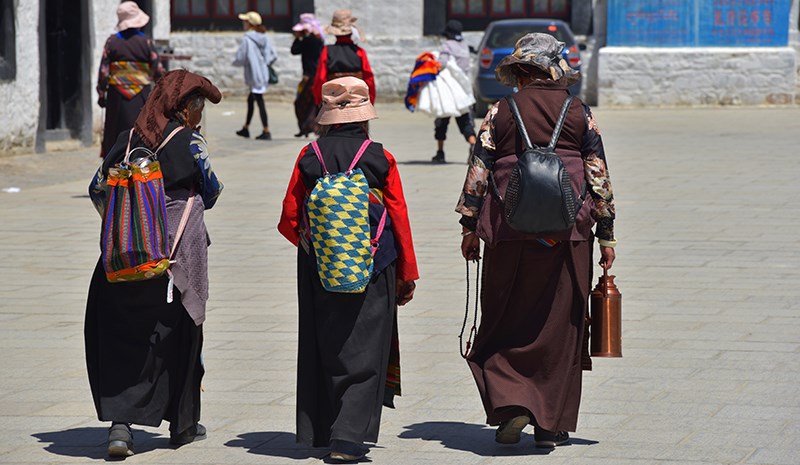 In the morning after the first 2 hours drive you will arrive in Gyantse and visit its Pelkor Chode Monastery as well as the splendid Kumbum Stupa (100-Thousand-Buddha Pagoda) nearby, both of them built in the 15th century and situated in the northwestern edge of Gyantse. Afterwards leave Gyantse along the lake Yamdrok to Lhasa (3650m), the capital of Tibet. The holy lake of Yamdrok Yumtso (4441 m), one of the three holy lakes in Tibet and the largest habitat of waterfowls in south Tibet. Enjoy amazing views at the Kamba La pass both to the lake Yamdrok and snowy Peaks Nojin Gangzang and Jangzang Lhomo. 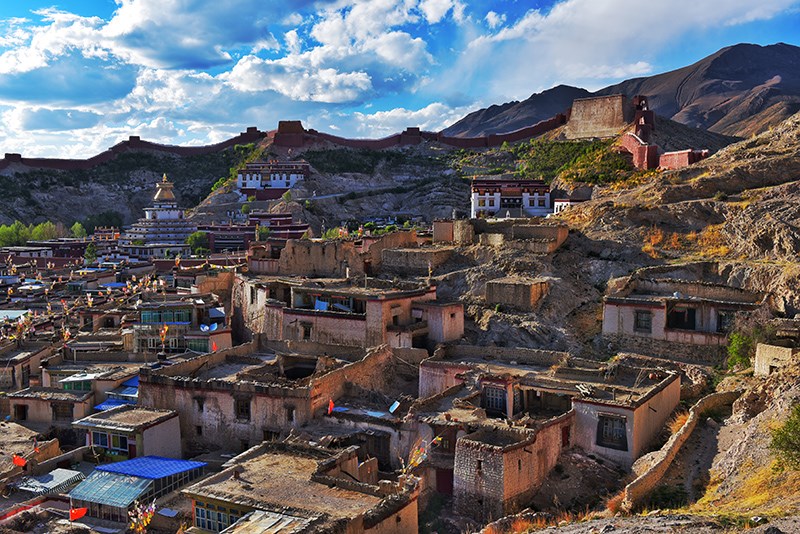 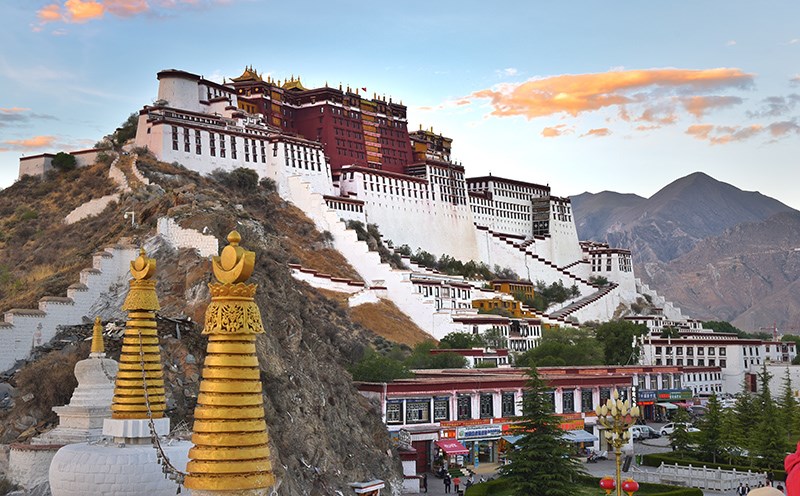 In the morning visit Parla Lupu Cave Monastery, located on the slopes of Yaowang Mountain, was built in the 7th century. It is 22m high and from here you can have a wonderful panoramic view over Potala palace. Then visit Norbulingka The 40-hectare jewel park was built in the middle of the 18th century. as a summer residence of the Dalai Lamas. In the afternoon you drive to the monastery Sera. Sera, the Wildrosenhof, is also one of the six master monasteries of the Gelugpa. You have the opportunity to experience lamas' debates. Public religious debates are part of the education of monks. 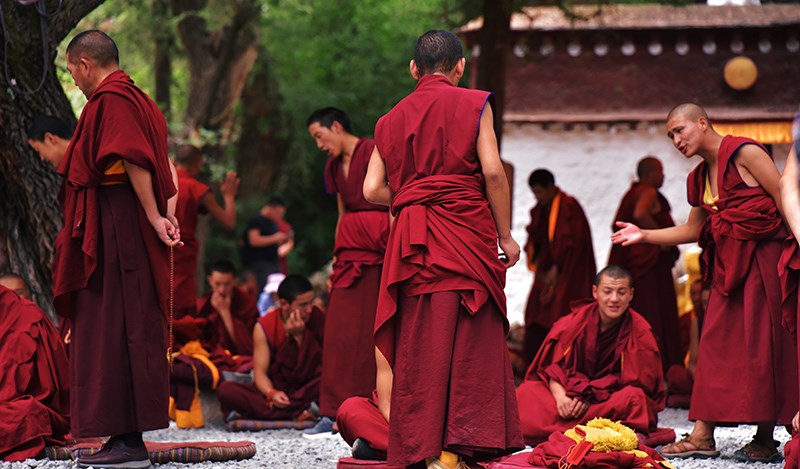 Today you drive north to Nam Tso Lake. At Nam Tso Lake, the nomads live in the vast Changthang (Qiangtang) Plain. With the at 4718 m above sea level, Nam Tso is the highest lake in the world. The Nam Tso is one of the three holy lakes in Tibet and it is an important sanctuary for the Tibetans. Walk around the Tashi Peninsula and complete a circle around the sacred mountain whose cliffs have been eroded in recent centuries. There are mani stones in the street. You have the opportunity to visit the people in the Yakshaare’s woven tents. In good weather, you can admire the magnificent sunset on Nianqingtanggula Mountain and Nam Tso Lake. 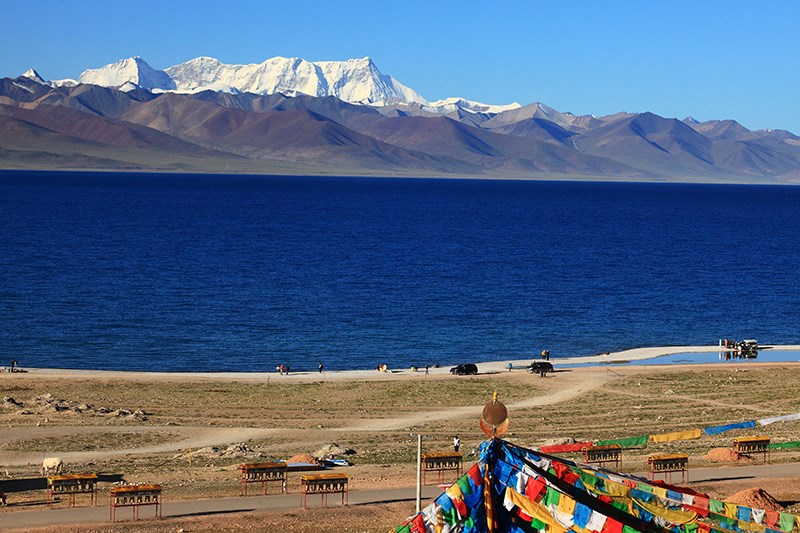 Today, you will wake up early to experience the unforgettable sunrise over the Nam Tso Lake and Nianqingtanggula Mountain on a clear day. Then drive to the northern shore of the Nam Tso Lake to visit the Shengxiang Tianmen (Holy Elephant Gate) and San Sheng Shi (Three Llives Stones) Scenic Areas. There are natural elephants stone statue and beautiful lakeshores at Shengxiang Tianmen Scenic Area. Besides, you can enjoy the spectacular panorama of Nam Tso and possess a great place to watch Nianqingtanggula main peak that is located in the south of Nam Tso. It is said that the couple will get marriage in the other three lives as long as they make a wish on the San Sheng Shi. Finally, drive to Bange. 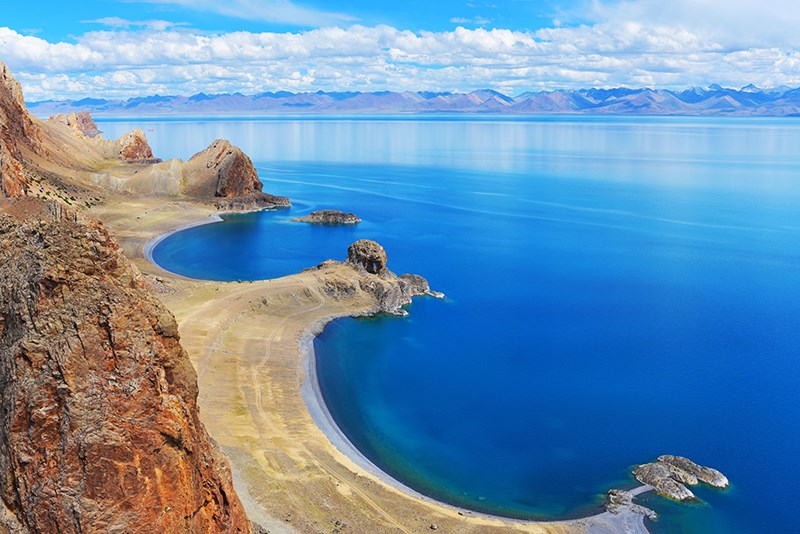 Today drive to the Serling Tso (4530 m), the second largest lake in Tibet. In Qiangtang, northern Tibet, you will see fewer and fewer people, but more and more wildlife and birds which you can photograph. Drive over a more than 5000 m high path and a small lake Dangqiong Tso to Dangra Tso (about 4500 m, or Dangra Yumtso). Here are many wild animals such as Elsels, deers, antelopes and birds. Dangra Tso is a well-known holy lake for the followers of the Bon. Friendly local people wear beautiful traditional costumes. In the south of the Dangra Tso stands out Targo Ri, the holy mountain of the Bon. 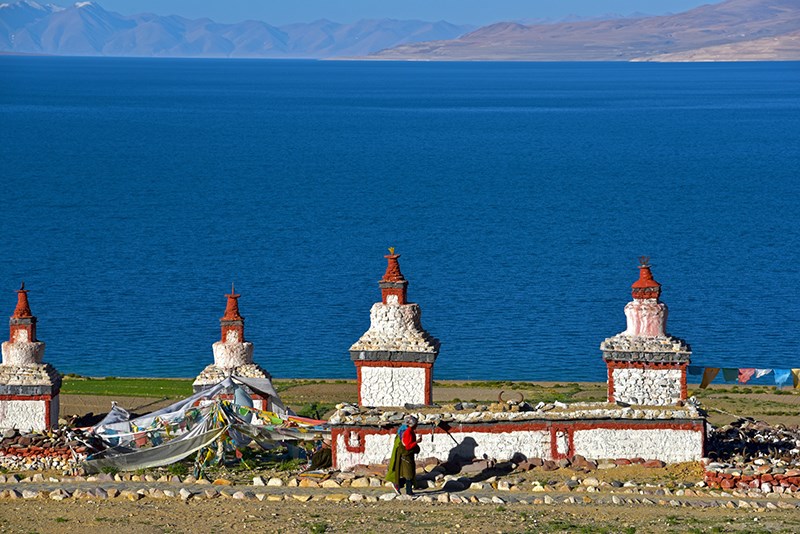 Walking and visit to Dangra Tso Lake in the morning, then continue via Nyima and the Dong Tso lake to Gertse (about 4500 m). 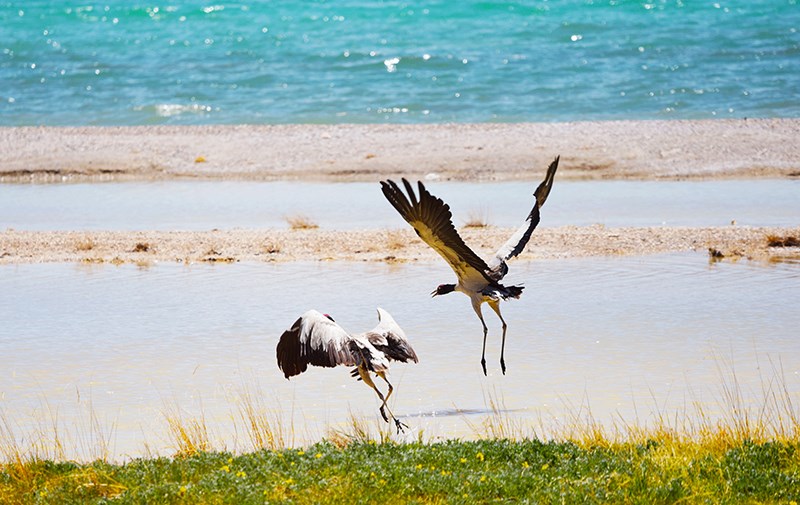 Arrival in Shiquanhe, capital of Ngari district in western Tibet

Continue towards west through the small town of Gerkyi (4524 m) to Shiquanhe (4300 m), capital of Ngari (Ali) district. 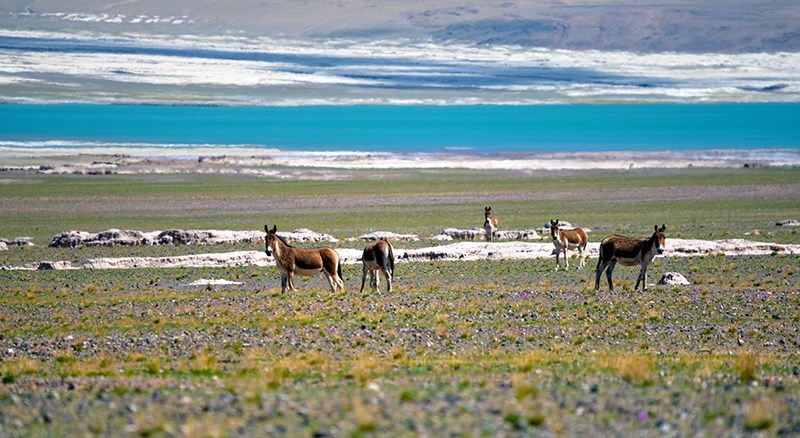 Earth forest in Tsada, ruins of the Kingdom of Guge, Tolin Monastery

Drive to Tsada, by the way admiring Tsada Earth Forest. Walking in the secluded valley of the Tsada forest, you feel like you are in the ruins of a huge old city. You can see a wild and imposing picture. Then drive to Tsaparang, the oldest center of the Kingdom of Guge. Four temples around the lower fortress walls, the fifth is located above the city, in the remains of the former summer palace of the kings. Various motifs adorn the coffered lattice ceilings and carved beams of the temples. Partly well-preserved murals with numerous details decorate the walls. Lama Anagarika Govinda calls these works of art "prayers and meditations in color and form, Every stroke is carefully completed". Then visit the Toling Monastery. Its unique murals represent exaggerated and extravagant style have a coincidental resemblance to Picasso's works. 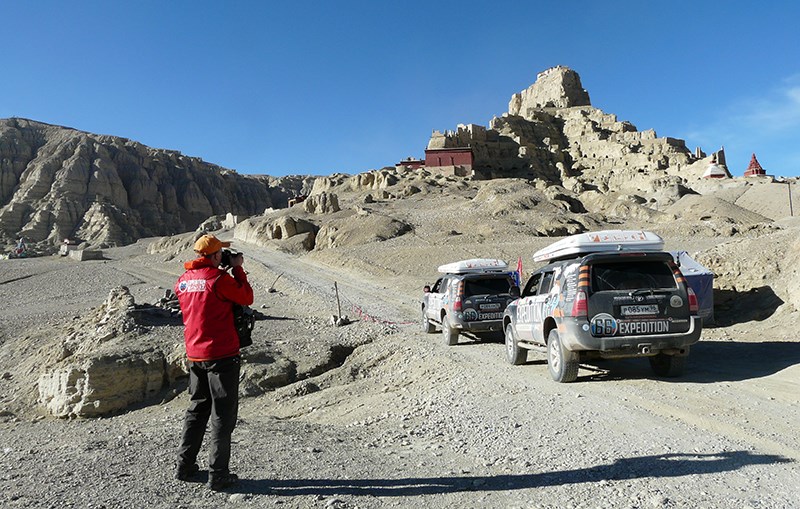 Ruins of Guge Kingdom
Photo by He Wenjing
DAY
15

Drive to Darchen (4,800 m, starting point of the Kailash circuit). The Darchen Town consists of only a few stone houses and is located about 6 km north of the main street. Soft hike at the foot of the sacred mountain Kailash and continue to reach Manasarovar Lake about 1 hour. With330 square kilometers and 81.8 meters deep, Manasarovar Lake is nestled between two snow-covered mountain ranges and is one of the most beautiful landscapes in Tibet. For Hindus, Manasarovar is holy water from heaven. For this reason, circumnavigation of the lake and ritual purification in its holy water are the highest goals for pilgrims. Short hike to visit Manasarovar Lake. Enjoy the scenery of the north-facing of Kailash and the eight monasteries on the banks of Manasarovar Lake. Overnight in a simple guest house near the Chiu Gompa on the north side of Manasarovar Lake (4588 m). 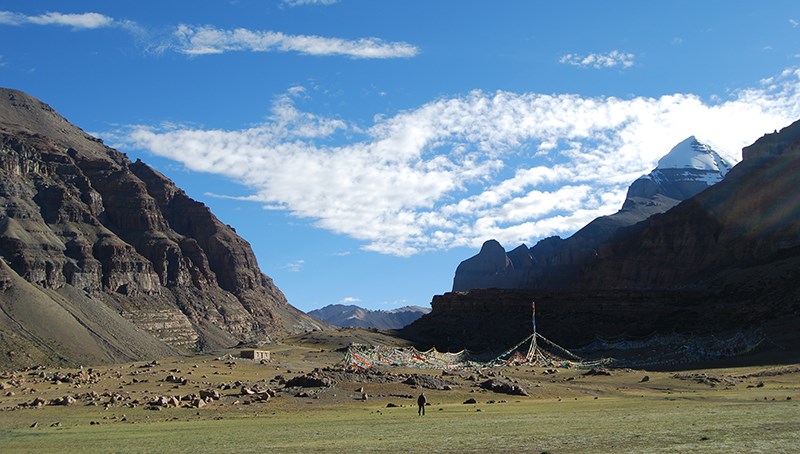 Morning walk around Manasarovar Lake. Then drive via Paryang to Saga. 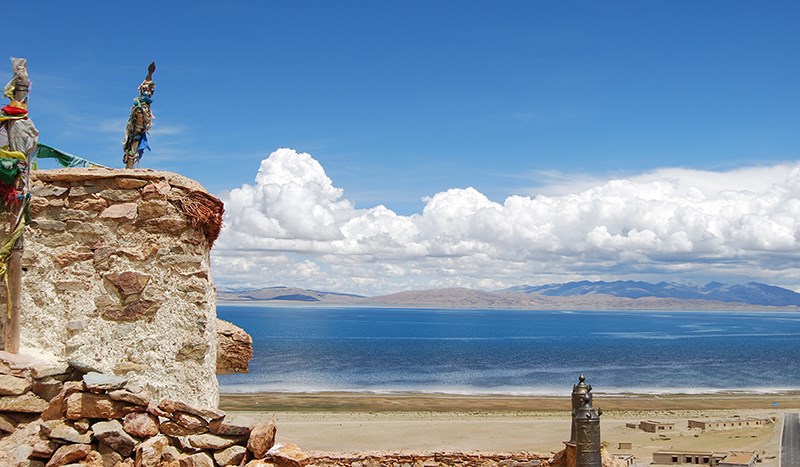 Drive to the customs at Kyirong, assistance for the exit formalities. 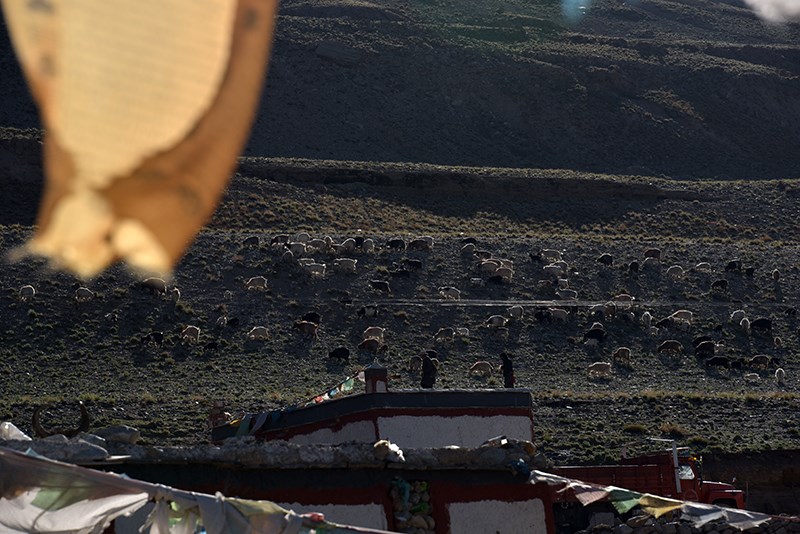